Deprecated: Methods with the same name as their class will not be constructors in a future version of PHP; SEOLinks has a deprecated constructor in /home/giggearreview/public_html/wp-content/plugins/seo-automatic-links/seo-links.php on line 13
 Effectrix, Game-Changer Effects In Today's Music Production 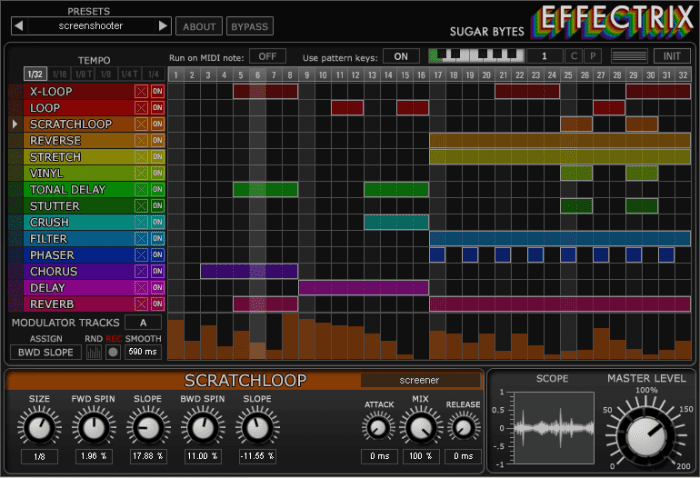 
Effectrix is a multi-effect sequencer made by the plugin developer Sugar Bytes. The software features 13 effects and a 32-step sequencer with 12 sub-patterns. Effectrix is ideal for musicians and live performers who would use an inexpensive digital tool for producing “grooving sound mutations and exciting breakbeat effects.”

This playful approach to mixing music on the fly creates an atmosphere of intuition and individuality, and the software comes with both factory presets and added randomizers. If you are familiar with a sequencer than the format will seem easy and intuitive. Accompanied by a transparent workflow, refined algorithms, and a GUI that leads to an ultra-fast learning curve, packaged effects include the following assortment of fun flavors:

Sugar Bytes Plugins Save you Time and Money

Effectrix is the brain-child of the Berlin-based plugin software maker, Sugar Bytes, who makes computer and mobile applications for studio use and live performances. The software creates multiple effects that are applied to sound like Looperator, Tornado, and Artillery, and, in doing so, is said to have changed the way music was produced.

This bold claim is certainly supported by the Sugar Bytes mission: “to produce and provide better tools for all our friends in music.” They are also meant to be tools that are better-looking and betting-sounding and easier “than anything else on the market.” Interestingly, the sound-altering venture of Sugar Bytes all started in Berlin, Germany 15 years ago as the brainchild of professional musicians, Robert Fehse (piano) and Rico Baade (guitar).

Also operating under the principle that computer software is but a tool to unlock the musician's imagination, the company continues to manage the development and updates of over 10 plugins, including Effectrix. As one reviewer put it, the powerful and creative nature of the software is even “palpable.”

And, in fact, according to their website, Sugar Bytes products promise to do “more stuff with fewer buttons,” and has more features with fewer instructions” to help musicians have more fun in a less expensive way. Finally, Sugar Bytes promises that their products “should save you time and money while providing more creative freedom and inspiring everybody to make more music,” which, we are guessing, was rather the point in the first place.

The Ins and Outs of Using Effectrix

But in order to get at what exactly Effectrix is all about, we will have to break down what it is and how to use it with the help of our friends at Tuts Plus.

Upon first impressions, the interface is colorful with clean lines and an intuitive design. Further, it seems, Effectrix may be one of those rare software that manages to pack almost all of its parameters and menus into one control cockpit window. Even for those who are timid of diving headfirst into an unfamiliar software, after one brief look around, you will become almost gleeful at the thought of the havoc you are about to r eek on everyday sound.

Down the left-hand side of the cockpit is a list of the effects that make up the base of the Effectrix sound augmentations. Usual suspects like reverb, delay, and chorus are prominently displayed, and, upon selecting any of the effects, additional parameters are pop up at the bottom of the screen.

The main box in the right-center of the cockpit is where you will see a patterned grid, listing your sequencer tempo and any effects you have added to the timeline. This is called the sequencer, and above this, toward the top of your screen, various pattern commands such as pattern tempo, initialization, and MIDI key options are listed.

With three different looping effects to offer, including X Loop, Loop, and Scratch Loop, you can get great repetitive sounds, and with Reverse, Stretch, and Vinyl, you can change the tempo and even reverse it. Plus, Tonal Delay works in the same way as normal delay, with the added benefit of adding levels of harmonics with each click of the mouse. Moreover, the Stutter effect will add auto-pan, tremolo, and vibrato effects at the push of a button as well.

There are more effects to run through, of course, but that will have to come later, as we still need to talk about the Effectrix plugin itself, ratings, and reviews.

Effectrix costs around about $100 and is packed full of effects. In fact, Music Radar actually goes on to say in an online article that the software is both “inspiring” and “addictive.” And, among another accolade, the review claims the plugin is a “neatly executed concept” with an excellent list of combined effects at a “reasonable price.”

Further, the cross-platform AU and VST sound effects plug-in also include many of the MIDI features you would find with the MIDI-savvy Artillery II effects keyboard. Plus, the list of 14 effects is all tied together by a sequencer cockpit control center that enables effects to be activated during a variety of time steps in a gridded pattern. Effects can be synchronized and layered on top of the native tempo or a new altered one.

The upshot is that, like the creepy guy on the phone with the altered voice a la the Scream franchise, the musician can affect his or her own mad sounds on the fly. We are talking reverbs and delays with pitches echoes, reverse effects, lo-fi, vinyl, and more, here, so it is ok to get a little excited.

On their own, the effects range from vanilla to wild, but, if you stack them together, you can get reverbs with phaser effects, whacked out delays, and more. Plus, certain parameters can be assigned to preformed modulator tracks for a really far out sounds and trippy effects.

Many reviewers, however, have pointed out that there is a marked lack of note divisions offered in the sequencer and only fixed routing effects, and effect are always being processed in a series. While there is, admittedly, a fine line between simplicity and a rich user experience, 6th-note triplets were also overlooked. However, the amount of fun that you can have with Effectrix overshadows these would-be deficiencies.

That fact that you can create patterns to be sent to a MIDI keyboard for interactive pattern changes via the “MIDI Learn Function” tool is a neat trick, indeed. Plus, each effect gets two Modulation Sequences, which can be assigned specifically to that effect.

From random, multilayered, otherworldly notes to tracks with a new age sound, Effectrix offers up a world of sound mixing possibilities in one elegant software package. There is such a vast realm of possibilities that it is worth recounting some of the rich plugin features again.

When it comes to audio track manipulation, you are always only a few clicks away from tweaking drum loops, create new rhythms, reversing some parts while stretching out others, applying delays, and even creating abstract variations with modulators. You can do just about anything and everything in a neat 32-step process.

You can even loop passages or create scratches with pinpoint precision in your arrangement, or set keys on your MIDI device to trigger effects. You can even let Effectrix do all the work and create a totally random sound masterpiece, put a reverb on a snare, or create mysterious echoing voices.

This playful approach to mixing music on the fly creates an atmosphere of unique, rich sounds like no other. The software comes with both factory presets and a la carte or bundled randomizers, and the workflow is intuitive and transparent. With packaged effects including a fun assortment of clips, samples, and other sound flavors like Looper, Timestretch, Scratch, Reverse, Tape Stop, Tonal Delay, Stutter, and more, music will truly never be the same.

Plus, for about $100, you will get a powerful piece of software that is both inspiring and addictive and is a great lively addition to any party featuring live music or a DJ. Moreover, it takes very little time to learn and produces deep-sounding complex effects.

But don’t take our word for it. Just ask music producer, Southside what he thinks.