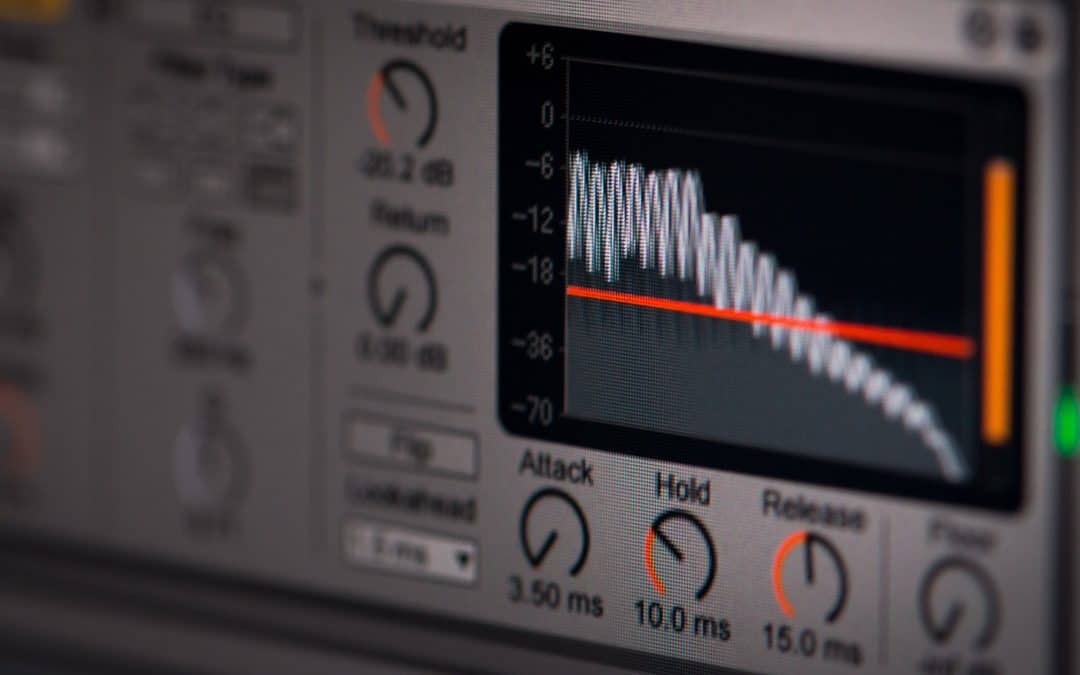 The Fletcher Munson curve has had a profound and long-lasting impact on how we measure sound. If you’re involved in mixing and recording audio tracks, you’re going to want to learn about this important tool.

The Fletcher Munson curve is the original equal loudness contour measurement. The key innovation of its development was the discovery that the human ear detects different volumes, even when all instruments are at the same amplitude. If you set a bass and a guitar, for example, to the same volume, you perceive the guitar as being “louder” to the casual ear. This is due to the different frequencies of each instrument.

The Fletcher Munson curve is so influential that the International Organization for Standardization (ISO) 2003 standards for equal loudness contours kept the Fletcher Munson metric as a basis for their industry standard.

What is a Fletcher Munson Curve?

The researchers behind the Fletcher Munson curve, Harvey Fletcher and Wilden A. Munson, invented a remarkable collection of sound measurement capabilities. Developed in 1933, they still affect everything we do for producing and recording audio. Let’s look at some of these key items before we dig deeper:

An innovation from the Fletcher Munson curve experiment, A-weighting is the U.S. noise measurement standard. It’s used to this day for measuring hearing loss, environmental noise, and industrial noise. It also measures the health effects of noise at all frequencies. All sound meters use A-weighting, even the ones on your mixing board. However, this is true only in the United States. Most of the world uses a different standard, called ITU-R 468, which you can read about below. 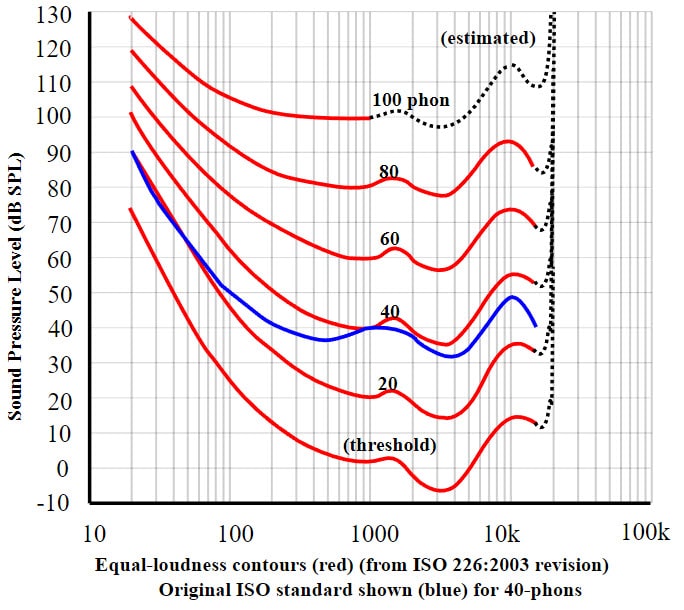 Measures of sound pressure over the full frequency spectrum span from the lowest to the highest frequency. The Fletcher Munson Curve also invented this concept, which is in use to this day. Each contour in an equal loudness contour set represents a frequency that is typically reproduced in the normal range of human hearing.

Measures of sound pressure over the full frequency spectrum span from the lowest to the highest frequency. The Fletcher Munson Curve also invented this concept, which is in use to this day. Each contour in an equal loudness contour set represents a frequency that is typically reproduced in the normal range of human hearing.

Amplitude is the strength of a signal of sound or of electricity. For sound waves, amplitude affects the volume of the sound. Go here if you want to learn more about amplification.

Frequency is the rate at which something happens. It is measured in cycles-per-second and expressed by the unit, Hertz (Hz). For example, if something happens 100 times in one second, the audio frequency is 100 Hz. If you want to see more about the way frequencies apply to how we play and record music, check out our article on low-frequency oscillators.

An interesting quality of sound and noise measurement involves deciding if you’re using headphones or good-quality speakers. They can affect your subjective experience of the sound and also the measurement of bass frequency response. Headphones won the argument because even the best speakers have difficulty accurately reproducing the lowest bass frequency sounds. At low frequencies, the ear is more pressure-sensitive. The cavity that forms between headphones and your ear is too small to introduce any extra resonances, thus giving more accurate measurements for bass frequency. Headphone testing was seen as a good way to derive equal loudness contours at the lowest frequencies.

When ISO 226:2003 (created in 2003) revised the Fletcher Munson curve, researchers determined that headphones didn’t work best for measuring all frequencies. The Fletcher-Munson curve used headphones for its measurements. If the source of sound is directly in front of the listener, then both ears receive equal intensity for all frequencies. The new ISO standard for equal loudness contours is based on the sound source being directly front and center of the listener. It also recognized how headphones produce the best response for low frequencies while good speakers produce the best results from higher frequencies.

The British Commonwealth countries and all of Europe use an alternative to the Fletcher Munson curve called the ITU-R 468 noise weighting standard. The Fletcher Munson curve works for measurement of audible sounds by themselves (a pure tone). It isn’t designed for the measurement of more random noise in electronic equipment, though it’s been used by most microphone manufacturers since the ’70s. Your ear responds differently to things such as white noise or pink noise, pops, clicks and bursts of random noise. Eventually, overseas audio scientists invented the ITU standard. It was eventually revised as CCIR-468. 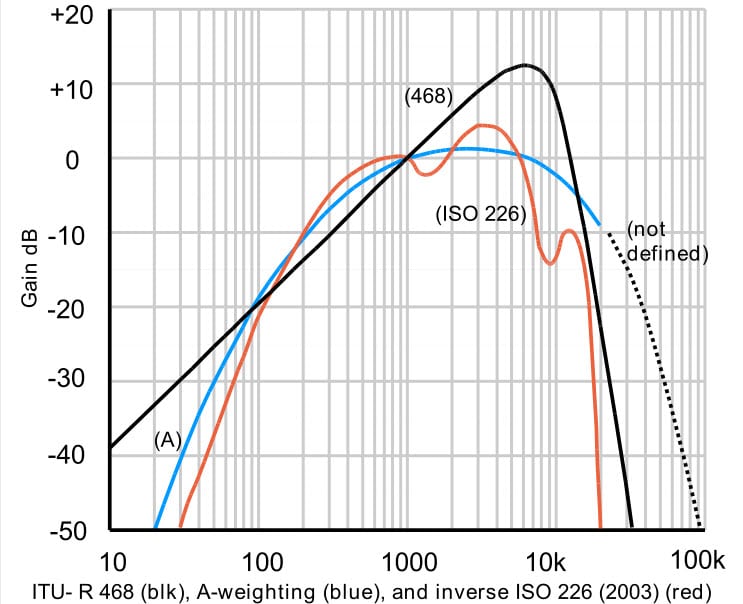 The never-ending quest to reduce noise and improve sound quality got a boost in the 1960s with the invention of the cassette tape. Cassette tapes made their way into answering machines, dictation machines, and even data storage on the earliest computers. Cassette decks used a feature called Dolby-B Noise Reduction. Dolby Labs created it as an attempt to improve on the audio quality of vinyl records. While Dolby-B succeeded in reducing noise, no one is nostalgic for cassette tape sound quality.

Dolby Laboratories accepted CCIR-468 as their noise monitoring standard. When you see any movie with Dolby, you are hearing sound processed by measuring and removing noise on Dolby systems. Other methods of measurement, such as the older A-weighting, failed to show the same noise reduction advantage.

Hi-Fi enthusiasts also embraced 468 weighting, observing the roughly 10dB improvement in noise subjectively heard on Dolby B cassette recordings. Other methods could show an actual worsening in some cases because they did not sufficiently attenuate noise above 10 kHz.

A-weighting and 468 weighting are complementary standards; microphone specifications often quote both for their noise ratings.

How can I measure and track audio and noise?

A vast number of sound measurement devices exist, loosely called decibel meters or sound level meters. Many are small handheld devices. Others are designed for the studio or for industrial applications. Let’s take a quick look at a few:

Most inexpensive sound meters use an LED screen for easy readability and have a similar handheld form factor. This relatively expensive unit also uses the current ISO and ITU standards and appears to measure consistently and accurately.

If you have a recording studio, you know how handy it is to have visible audio measurements. This device samples your audio twice a second and continuously tracks the loudness of your signal in decibels. It also hangs on the wall. Yes, this device also relies on the innovations from the Fletcher Munson curve for its technical underpinnings. Reviewers also note its usefulness for measuring industrial noise in their factory.

You can spend as much money as you want on measuring and quantifying sound; as a result, the Extech SL400 simply does more. It measures peaks and can sample up to 24 hours of sound. You can download sound measurement data to your computer. Extech aims the device at heavy industrial applications, but can also be used for pro audio. It’s another perfect Fletcher Munson curve application.

It’s remarkable that the ancient Fletcher Munson curve, developed in 1933, remains in meaningful use today. Its equal loudness contour, combined with ITU-R 468 noise weighting, covers almost every application for sound measurement. Developed in the depths of the Great Depression, the Fletcher Munson curve illustrates how intelligent science can endure. Your experience in sound recording and engineering still in large part relies on this remarkable measurement, even if you don’t ever directly use it. Please let us know in the comments below how these two standards have influenced your work.