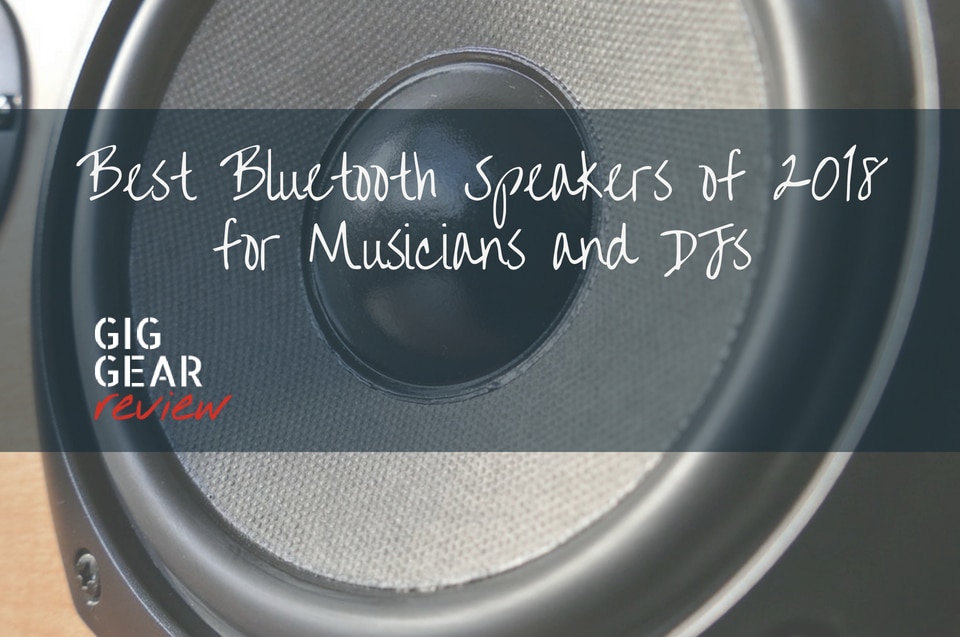 ​​​​​​​​​​​​​​​​​​​​​Speakers can make or break any musician’s or DJ’s performance. Sound quality is essential to any performance, and you want to be sure you’re using the best Bluetooth speakers available when you need to go wireless. 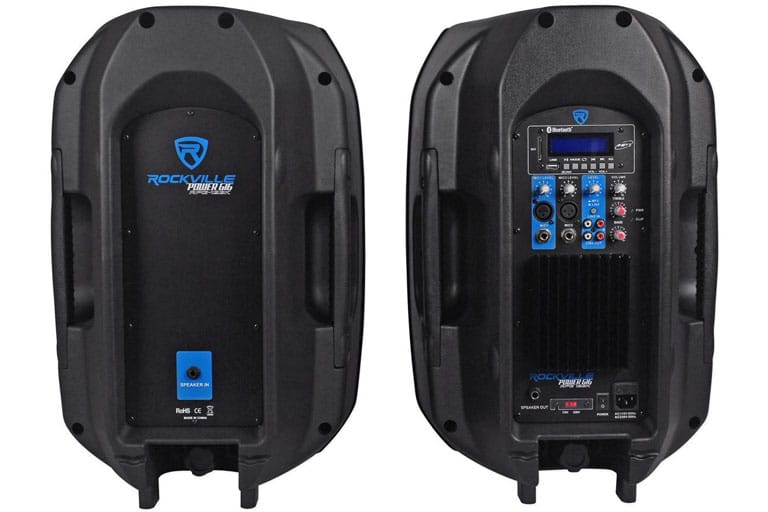 The Rockville RPG122K speakers are great speakers for any DJs party or get together. These speakers are fully equipped with plenty of features to ensure a great experience and complete control over your music. Rockville’s speakers provide a clear, loud sound and come with stands so you can put them where you want.

Rockville has built speakers that are durable and sturdy. Complete with first-class components, these Bluetooth speakers won’t damage or break. That doesn’t give you license to treat them poorly but cared for properly, you’ll have a solid set of Bluetooth speakers for years to come.

While the speakers are not lightweight, they do have an ergonomic handle which makes them easier to move and transport. You’ll also appreciate the stands, which makes setup and teardown simple and straightforward. Overall, the speakers sport a unique design and black finish, which gives them a great look.

If you’re looking for the loudest Bluetooth speakers with excellent sound quality, then look no further than the Rockville RPG122K. These Rockville speakers offer up to 1000 watts of power with clear highs and resonating lows. The built-in amplifier lets you adjust the music, and with all of these fantastic sound features, you can forget about experiencing any distortion.

With built-in Bluetooth technology, you don’t have to worry about whether or not you have your music. You’ll always have it with you if you have your smartphone. This is a pretty convenient feature if we do say so ourselves. Along with Bluetooth functionality, you’ll also get a 1/4 cable to use for stereo sound, and a wireless remote if you decide to control the settings from far off.

Rockville has made their speakers easy to use with plenty of controls. You can adjust treble, bass, and volume as needed. You’ll also receive a mic with your Bluetooth speaker, so you know your audience will hear you.

There are a few cons to the Rockville RPG122K. The previously mentioned stands are not the best quality and are prone to bending. Additionally, the sound you get from the mids isn’t great for electronic music.

Rockville offers a great Bluetooth speaker experience with their RPG122K speakers. The precise highs and vibrant lows will make take your music to another level. No matter the performance, you’ll have your guests leaving satisfied. Be gentle with the stands, and if you play most electronic music, these may not be for you. 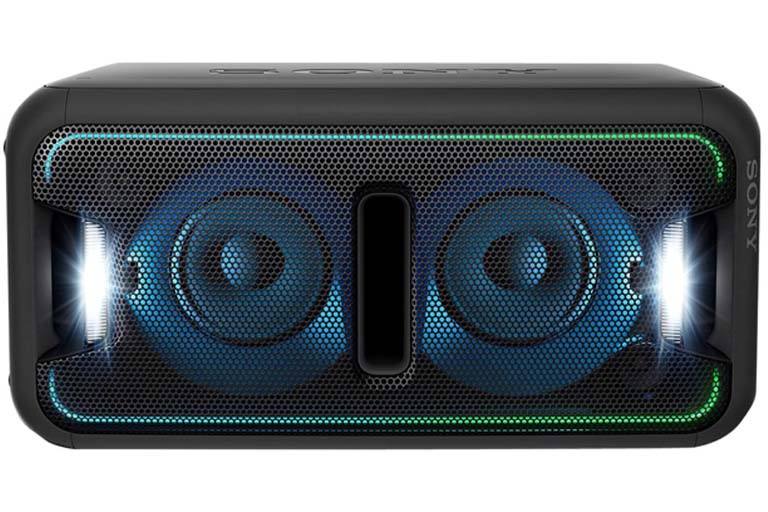 No Bluetooth speaker list for musicians and DJs would be complete without outdoor Bluetooth speakers. The Sony GTKXB7BC is flexible, portable, and reliable, and is quickly set up and used outdoors. You’ll find that these speakers are perfect for any performance, no matter whether it’s inside or outdoors.

Sony’s speakers are the opposite of the heavy and bulky speakers DJs and musicians get used to lugging around from show to show. You’ll find that they are easy to transport and carry no matter where your next performance takes you. That means you can make yourself available for any venue at any time.

You’ll find the control on the top of the speaker, which allows quick and convenient access to them. Four buttons each have their own purpose: power, bass, and two for volume control. Additionally, an LED light near the buttons lets you know when a Bluetooth device pairs with the speaker.

One last design perk of the Sony GTKXB7BC is its ability to stand up vertically or lay down horizontally depending on your needs. That means no matter what type of space limitations exists; you can find a way for the show to go on.

This speaker was meant for outdoor events and has the sound to prove it. The beauty of Sony’s Bluetooth speaker is that you won’t lose sound clarity, even at max volume. It produces a loud, brash sound that your patrons will find hard to ignore.

Typical speakers don’t do justice to the bass a lot of songs have. The Sony speaker has no such problem. With an extra bass button, you’ll be able to take fans to another level of deep, resounding sounds.

It doesn’t matter whether you have the Bluetooth speaker vertical or horizontal. No matter how you position it, the sound stays the same. Embedded within the speaker are sensors that tell the speaker in which position it is in.

Perhaps one of the most significant drawbacks to Sony’s Bluetooth speaker is that it requires AC power. Sure, all you have to do is find an AC plug, and you’re in business, but what if you’re outside and there isn’t one nearby? If there’s a silver lining, it’s that you never have to worry about battery life in the middle of a performance.

This will sound redundant since we’ve already mentioned it, but one key con to the Sony Bluetooth speaker is its lack of battery. It’s always nice to know you have juice, but there are times when batteries come in handy. Additionally, the speaker does not include an audio cable, which is pretty standard with most speakers nowadays.

Sony’s Bluetooth speaker offers exceptional sound and quality and doesn’t sacrifice clarity for sound. It can stand up or lie down, so it’s ready for any type of performance. However, it doesn’t offer a battery, which can be a deal breaker for some people. You’ll have to decide if it’s one for you. 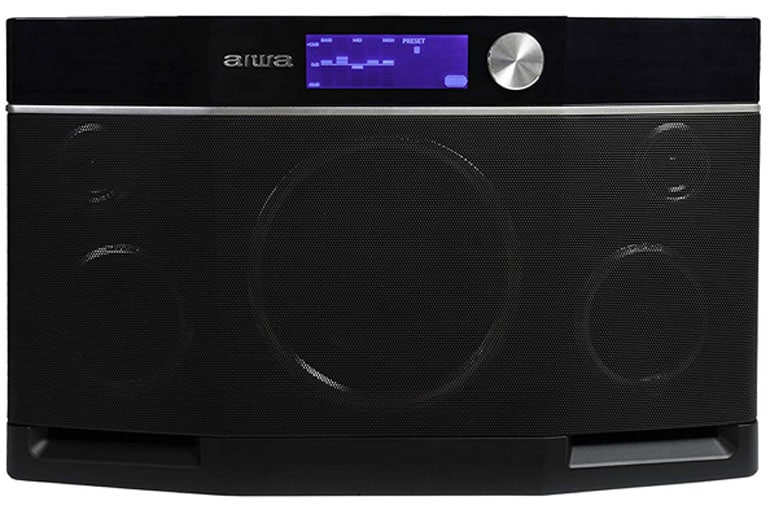 The Aiwa Exos-9 Bluetooth speaker exudes class. It is a sophisticated speaker with long battery life that offers a fantastic sound. This speaker is easy to set up and use, connects easily to your Bluetooth devices, and includes a removable battery. It has the potential to be a great addition to any performance.

To begin with, the Aiwa Exos-9 looks incredible. Its design says nothing but class, and its black finish makes it appealing. The Exos-9 is the perfect stylistic addition to your performance no matter where you are. It looks right at home in the club, in the backyard, or anywhere else you’re taking the stage.

Made of high-quality materials, the Exos-9 is durable and reliable. It’s designed for both outdoor and indoor use, and won’t fall apart if it’s bumped or gets dirty. The Exos-9 is extremely portable, checking in at a svelte 13 pounds. You’ll be able to carry this magnificent Bluetooth speaker with you no matter what you’re going.

The sound quality on the Exos-9 is lovely. When you turn the volume up, you won’t hear a lot of distortion. The highs remain clear, and the lows resonate beautifully. With a 6.5-inch dual voice subwoofer, the Exos-9 Bluetooth speaker is perfect for any type of music.

Whether you’re looking at a mid-sized gathering or a significant performance, the Exos-9 can handle any environment. If you want a dual-stereo sound, you can purchase two Exos-9s and connect them via Bluetooth. This will give your guests the benefit of a true surround sound performance.

Aiwa’s onboard controls give you complete control over your Bluetooth speaker. You can manipulate the equalizer, bass, and treble to suit your needs. As a result, you give your favorite songs the extra punch they need.

There are a few drawbacks to the Aiwa Exos-9 Bluetooth speaker. The previously mentioned controls can be complicated. If you’re not familiar with onboard controls, you will have to be patient as you learn them. Additionally, the battery can be troublesome to remove. It’s not impossible, but again is an area with the Exos-9 that will require some patience.

As you can see the Aiwa Exos-9 is a solid, well-designed Bluetooth speaker that will never look out of place. You’ll get great clarity and sound no matter how loud you turn up the volume. Its onboard controls give you the ability to adjust the sound to your liking. If you’re looking for a great Bluetooth speaker for your performances, the Aiwa Exos-9 is a great option.

Searching for a Bluetooth speaker can feel like a daunting experience as there are many on the market right now. To refine your search and select the best unit for your needs, focus on the connectivity options these units offer.

Obviously, a Bluetooth speaker features Bluetooth connectivity, but your options don’t have to stop there. Check online reviews for feedback on how easy and reliable the Bluetooth connectivity is. Generally speaking, this is simple to set up though if you wish to move around with your speaker, you’ll require a signal that travels far. If you’re based in a busy area with numerous transmission signals traveling through the area, you may need a Wi-Fi connection or USB port, too.

Wi-Fi is ideal for a stable connection and is an excellent back-up if you live in a busy environment with multiple Bluetooth devices switched on. Don’t forget AirPlay, too - a wireless streaming service developed by Apple. This is an ideal connectivity option if you use Apple Music and iTunes to purchase music. If you’re willing to increase your budget, AirPlay 2 speakers enable you to connect to multiple speakers at the same time. Many Bluetooth speakers with AirPlay also feature Siri support, which is excellent for ease of use.

What are You Waiting For?

Listed above are three great Bluetooth speaker options for musicians and DJs. No matter where you’re performing, these speakers will get the job done, and provide a great sound no matter how loud the volume gets. If you’re in the market for a high-quality Bluetooth speaker, you can’t go wrong with any of the ones on this list.

So what are you waiting for? Get up off your rear, get yourself a solid Bluetooth speaker for your next performance, and make the crowd go wild!

Thanks for reading! If you enjoyed this article and are into sound engineering. you may appreciate our article on the best studio monitor stands.