List Of 9 Best Guitar Songs For Beginners: The Ultimate Guide 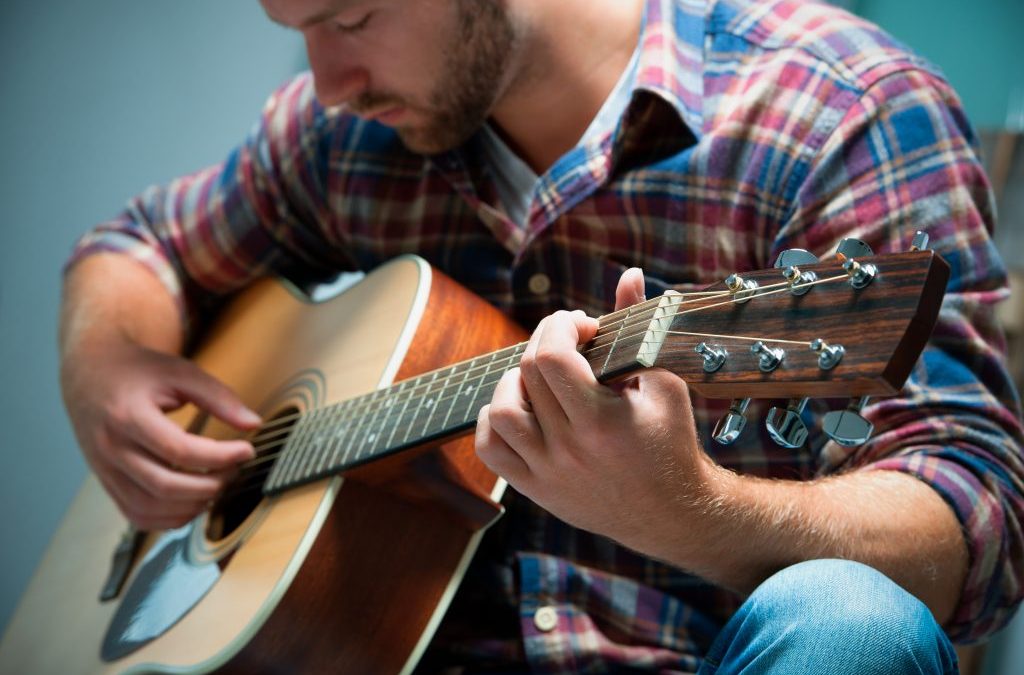 For guitar players just starting out, the path toward releasing your inner Hendrix can seem a bit like Sisyphus pushing that infernal boulder up a hill only to have it crashing down of his head every time.

In other words, it may seem like a fruitless task. But, thanks to apps and games like Fender Play and Guitar Hero, the appeal of being able to pick and grin with the best of them with stepping inside of a single classroom is higher than ever.

So, whether your motivation is to be the “cool guy” at the party, strum those 3-chord Tom Petty classics out of the buzzing amp in your basement, or actually make a go at the rock star dream thing, you have got to start somewhere.

And, with so many catchy and classic tunes out there, from ZZ Top to Foster, learning your first chord may not be as hard as you might think.

Quick Navigation
Comparison Table
Folsom Prison Blues by Johnny Cash:
Rockstar by Nickelback:
Shake It Off by Taylor Swift:
Seven Nation Army by The White Stripes:
Sunshine of Your Love by Cream:
The Joker by the Steve Miller Band:
Blister in the Sun by the Violent Femmes:
Born Free by Kid Rock:
I Ran by Flock of Seagulls:

Guitar Songs for Beginners Don’t have to be Boring

Practicing beginner songs may not seem like sexy work, locked in your basement or garage, playing dated tunes until your fingers bleed, diving into chord sheets that don’t make any sense.

But the world of guitar songs for beginners is changing, and there are a surprisingly large number of classic and modern songs that subscribe to the simple, three-chord theory.

In fact, we are reminded by Fender, in an article online, that Ben Kweller wrote “Thirteen” while he was in the studio recording his third album. And Fender Play has managed to simplify the song down further to a beginner version that features just two one-finger chords.

Moreover, Tom Petty’s Won’t Back Down and Free Fallin’ offer simple chords that sound great while you practice them. So when you finally master the techniques, you will be able to rip a song that is instantly recognizable and not that hard to play. Then you could become that instantly popular person you’ve always wanted to be.

“Pumped Up Kicks” by Foster the People was such a groovy-sounding song with a rich feel that it received a Grammy nomination in 2011 for Best Pop Duo/Group Performance. The song itself, though, is actually just one easy chord progression using down strumming on open chords.

And say what you will about the former Sublime frontman, Bradley Knowell, but he knew how to write a catchy tune, and a simple one too. What I Got is still as salient as ever more than 20 years after his untimely death, and it is a perfect example of guitar songs for beginners because it only has two chords.

Other noteworthy tunes that may jumpstart your playing career come from CCR, ZZ Top, and even the bluesy, I Can’t Quit You, Baby by Willie Dixon.

Who would have thought that the Blues could have been named in a list of guitar songs for beginners?

A Bit on Beginning Guitar Theory and Lingo

If you are at least halfway lucid, you are probably saying to yourself, “surely this blog doesn’t mean to imply that anyone who is sitting upright and facing the right way can pick up a guitar, learn a few chords, and be playing the classics in no time?”

To which we would answer yes and no.

While the classically trained musician will have a fuller, richer understanding of music as well as access to the full musical spectrum of chords, as a novice player, there are a few chords that you can get a lot of mileage out of in a very short time – if you are willing to put in the work.

Moreover, many modern and classic songs subscribed to the “basic chords theory” to build an onramp to the spoils of fame and glory over the years. (After all, not all rock stars are cut out to be Jimi Hendrix, Metallica, or Van Halen.)

In other words, you don’t necessarily need a large chord vocabulary to play many of the great songs you listen to on a regular basis.

In that vent, Guitar Tricks has put together a list of the some of the most popular chords for beginning guitarists and suggests that you approach that list in the following way.

“A Major” is probably one of the easiest places to start. It starts with the fifth string on your guitar, and there are only three other notes that make up the chord.

The order is from top to bottom, from the Perfect 5th to the Octave and, finally, onto the Major 3rd. From there, you can move on down the scale to A Minor, C Major, D Major, and so on.

Once you have mastered notes and chords, you can move on to common dyads and triads.

We’ll skip the musical theory on these and move right to the power chords, harmonious chords, and more, which can be found at Guitar Tricks chord chart. 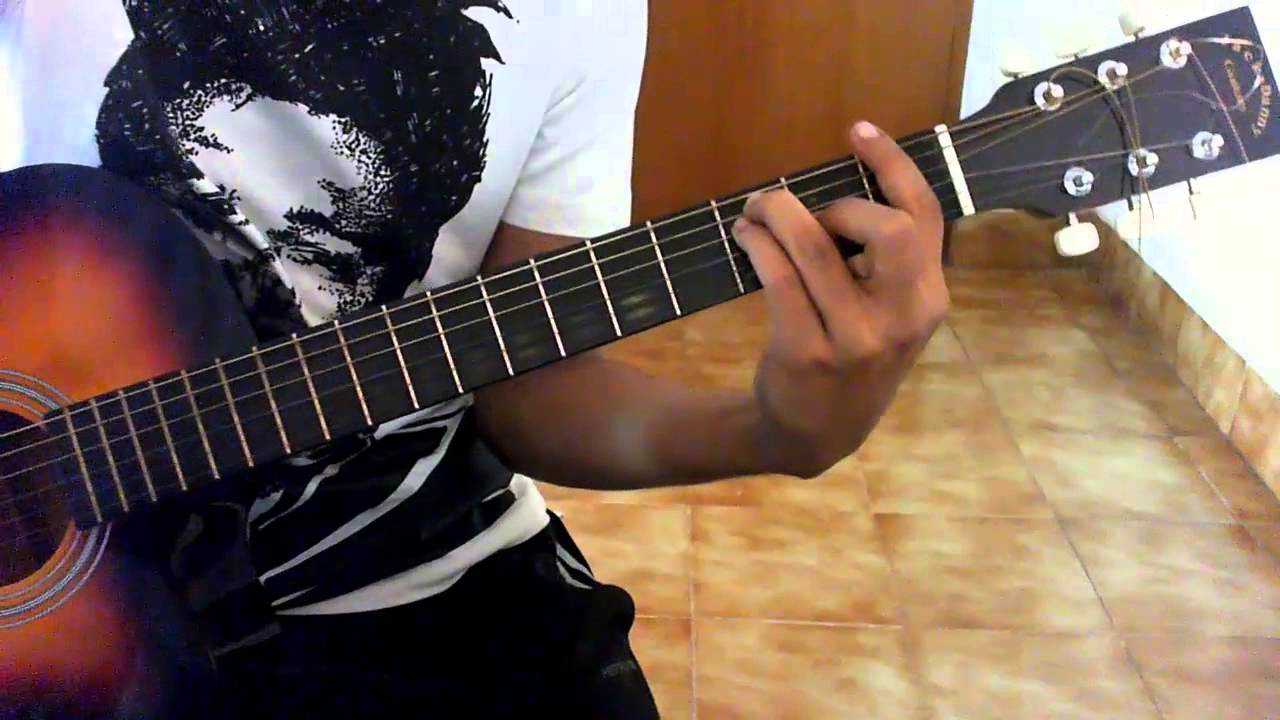 Speaking of skipping on to the real subject, it is now time for our 10 best songs for beginners list. We have scoured the internet for the most rocking versions of easy-to-play tunes that might surprise you.

From top Indie lists to Punk and country lists here are out tops picks based on fan ratings, chord sheet availability, song catchiness, and more. 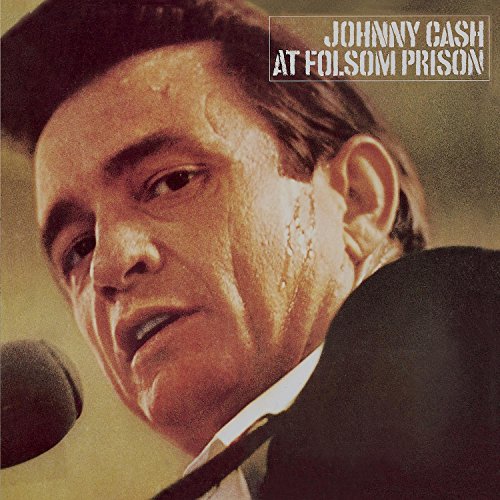 This song was written in 1953 by The Man in Black, himself, Johnny Cash, and it was first recorded in 1955, although it would eventually be included on two albums.

Anthropologically speaking, the song borrows from two types of popular folk styles, the train song, and the prison song. The song was also recorded live at the namesake prison in 1968 became a #1 hit on country music charts in the same year.

We’ve also linked to the Everlast cover because of the mean hook, which you will remember from another popular song that singer was involved with. But, essentially, in terms of learning chords, it is the same song. 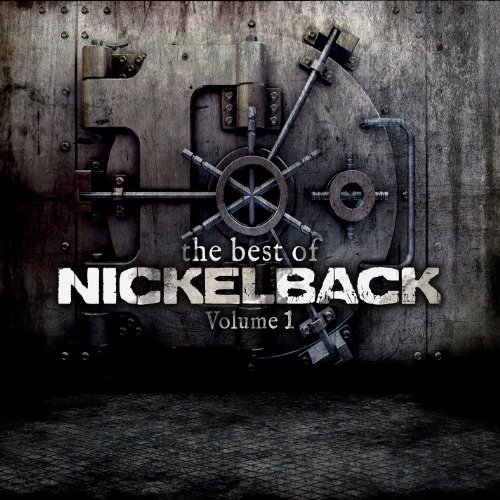 When Canadian-born, Chad Robert Turton (Chad Kroeger) burst onto the scene with his band, Nickelback 1995, it was almost immediately thrust into the limelight with its smash hit, How You Remind Me.

Perhaps in response to this newfound fame, Chad penned the band’s fifth and most successful single, Rockstar. The song is instantly recognizable and pretty easy to learn. Plus, the video it features cameos from Rock legends ZZ top, Wayne Gretzky, and others.

Pumped Up Kicks by Foster the People:

We mentioned this song above, so we thought we had better put it on our list and link to the video (since the tune is now stuck in your head). Besides being deceptively easy to learn for beginning guitarists, it is catchy as hell.

Shake It Off by Taylor Swift: 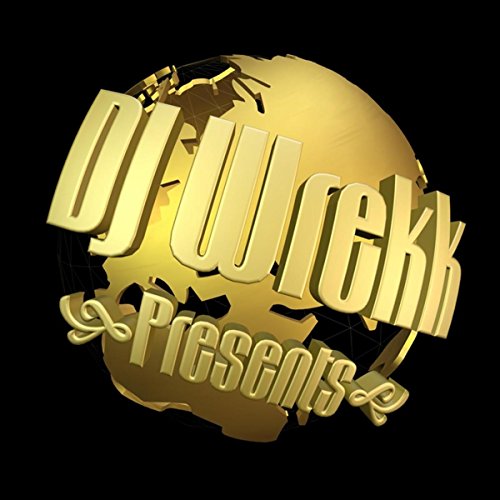 The song has a surprising toothy beat, which was recorded from her fifth album, 1989. A bit of a departure from Swift’s pop/country style, it was removed from the early albums, but, when the song finally hit the airwaves in 2014, it went straight to number one on the Billboard Top 100. By many accounts, this catchy little number is as easy to learn to play as it is to listen to because it only uses three simple chords. You can find the lesson and the chords here. 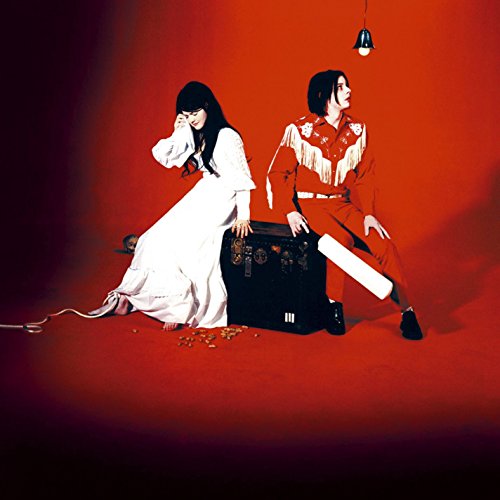 What budding young guitarist doesn’t want to play a Jack White signature song? Released as a single and as part of their fourth studio album in 2003, the tune has become The White Stripes’ flagship song, and the James Bond-like riff is infectious as hell. Plus, the main riff can be played on one string and song is a great exercise for beginners in how to move around the fretboard.

Sunshine of Your Love by Cream: 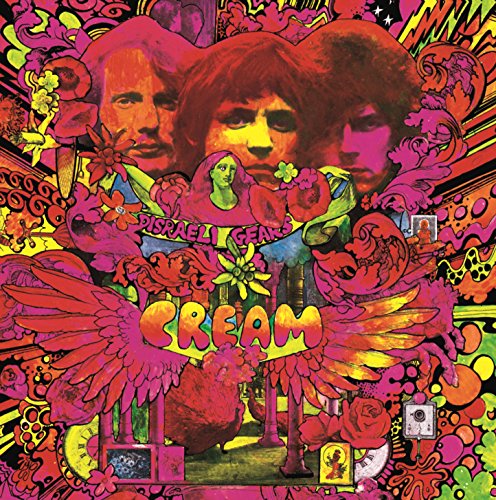 “Sunshine Of Your Love” by British rock band Cream, offers a mean-sounding riff in this tune that is deceptively easy to learn. This song offers one of the most recognizable riffs of all time but is really just a great example of one-note picking. Catch the song and the lesson here.

The Joker by the Steve Miller Band: 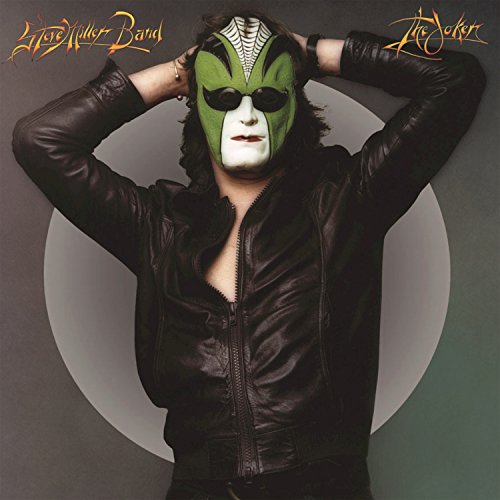 The Joker was released in 1973, and despite some of its lyrics being nonsensical, it rose to number one status on the Billboard Top 100 the following years. This song is easy and not too fast, and the chords are straightforward. Plus, this instantly recognizable classic has been covered much time by different artists like The Smashing Pumpkins and Jack Johnson. Featuring three easy to learn simple chords, this song sounds great and is an easy starting point for the beginning guitarist.

Thirty years after its release, this punk rock classic sounds as great as it ever did. The intro, verse, and chorus are comprised of just three notes. Plus, it is a great bridge from guitar to lead guitar. Moreover, you’ll sound really cool playing one of the greatest punk riffs ever as you practice. 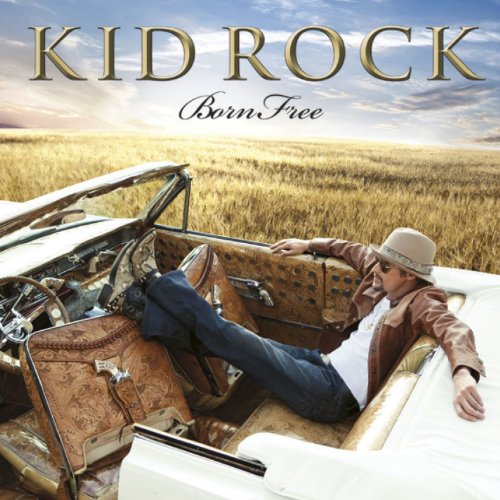 Born Free is the first song of the album by the same name, which is Kid Rock’s 8th Studio Album. Not only does it have the artists’ characteristic Country meets Rock sound, it is surprisingly easy to play. This song is almost entirely made up of A and E, although in the bridge you’ll need to find D and Db, the chord sheet makes it all pretty easy. The song sounds impressive, but it is also ideal for an acoustic or electric guitar beginner.

I Ran by Flock of Seagulls: 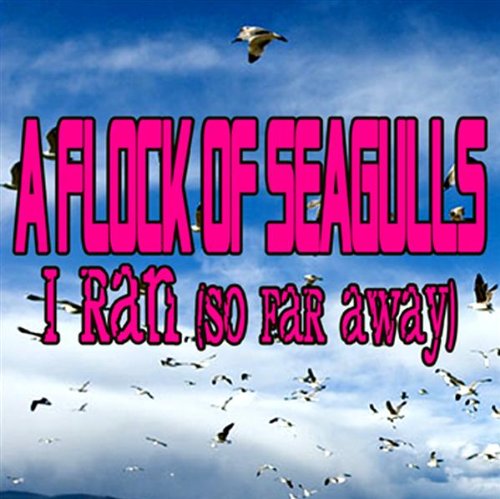 This 80s hot was way simpler than it sounded, and there was reportedly a lot of engineering going on in the sound room. The layers of synths and guitar effects make a simple AB song structure sound a lot more complicated than it is. With a song structure that uses only two chords, if you can find a chord sheet that features Am–G, you’ll be golden. 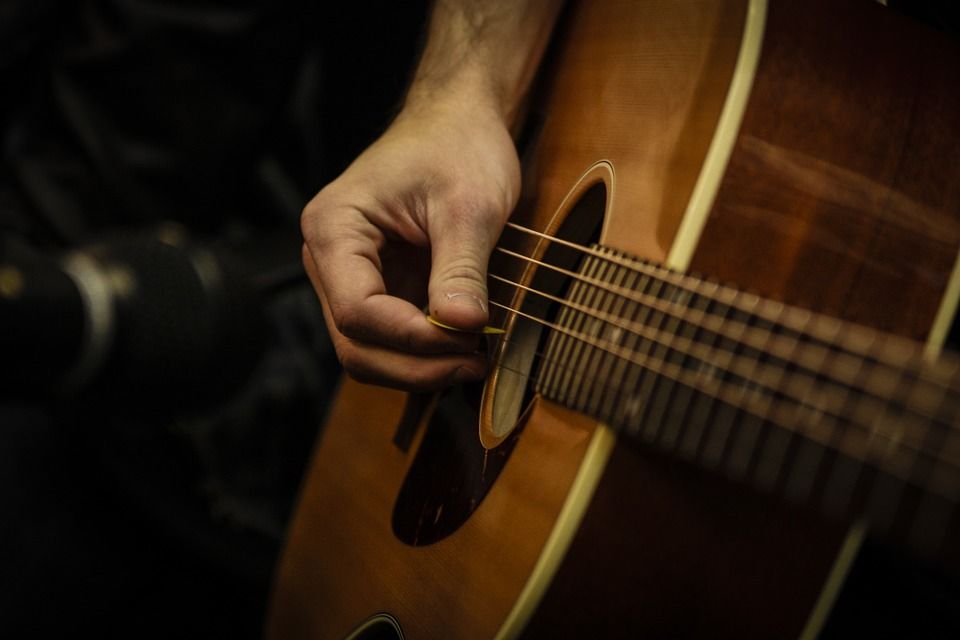 As if being the cool guy for once wasn’t enough motivation, we have included some catchy tune with links to chord sheets, lessons, and the grooving songs themselves.

Plus, there should be enough songs to get you started.

The biggest key is thinking of it as a fun, fulfilling hobby that you get to work on by surrounding yourself around music.

There are enough songs for beginners, lessons, and chord sheets out there to keep you from getting bored. If you have the interest, you can be playing covers in no time.

Motivation is the key and there are certainly enough options to keep you busy.

So, what are you waiting for?

Get playing, and don’t be afraid to mix things up. Once you get familiar with the fretboard, you are encouraged to go off book. That is part of the fun of music and guitar songs for beginners.